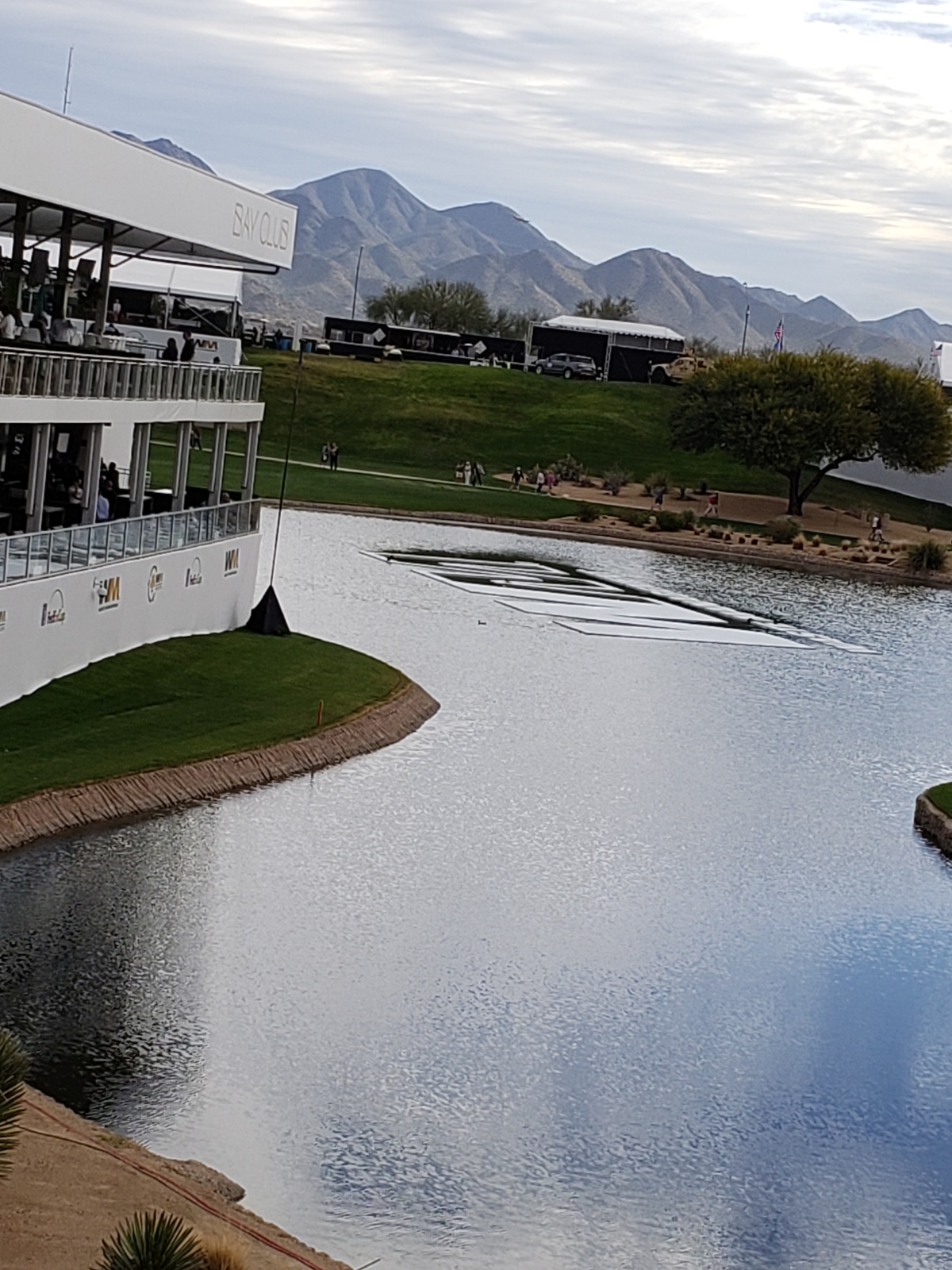 This weekend was the Waste Management Phoenix Open in Arizona. Due to the travel restrictions, we are watching with minus 38 degrees and our fireplace is on in northern Saskatchewan. It has been labelled the “Greatest Show on Grass” and rightly so. Usually this tournament will attract more than one million fans and of course the rowdy par 3 hole #16 is daunting to any player as the fans show disapproval loudly and often.

I remember when times were very different and we had been invited to experience a day at this iconic golf course in Scottsdale Arizona during the Waste Management Phoenix Open. Lyle and I picked up our tournament package and found purple wrists bands that gave us access to the VIP hospitality at The Bay Club on the 17th fairway. We had parking passes and a luxury coach access to take us directly to our express entrance. There was a first class premium experience from the moment we arrived on site with hot lattes for breakfast. We arranged ourselves on plush furniture , the music was playing softly in the background and we sat in the front row, watching players arrive to play this drivable par 4 with water close to the green. All the celebrities and stars of the game were playing . The challenge on this hole was the choice to drive the ball the distance and earn an opportunity to card an eagle or risk your ball flying into the water hazard. Risk or reward.

We were able to witness one of golfs great lessons on that day. Gary Woodland , the defending champion was walking the course with a young AZ State High School golfer when he asked her if she would like to play the 16th hole with him. Amy was ready to play and grabbed her club. She was fearless. She hit her tee shot into a bunker and as she walked up the fairway, she planned the next shot. Happy and excited she was heard to be saying to herself, “I ve got this” with conviction and quickly hit the shot up to the green where she then parred the hole . Gary Woodland was impressed with her shot but more impressed with her attitude, Amy was the inspiration for Woodland to go on and win the tournament.

Amy has Down’s syndrome which may have caused some physical or mental developmental delays, yet she has qualified to play two high school championships and Special Olympics events. She has been an inspiration to a lot of golfers since that day in February 2018. Amy believes in what she has been taught, the mechanics of the game, but also the philosophy of staying in the moment. It has been said that we only have one shot, our next shot and yes, we have got this one if we can just believe. Amy believes in Amy and its not complicated. She loves the game.

This year, the drivable par four 17th hole held lots of drama as the eagle chance was a chip in that set up Brooks Koepka for the win on Sunday. Recently, Brooks has been recovering from injury and working hard to make the cut at tournaments but he believes in himself. With this win, he showed us all it is focus and faith, just one glorious shot at a time.

Golf can be a lonely difficult game but it can also be a joyful, dramatic, perfect moment if you play one shot at a time. I remember the message posted over the entrance as we arrived at the tournament in Scottsdale, 125 will enter and only one man leaves the winner, yet, when I remember this tournament it will always be Amy who played one hole – who also won that day and reminded us all why we love this game . Gary Woodland ended up the champion on that Sunday with a minus 18 score. He won with inspiration and a lesson in joy and belief and friendship that he may never forget and every fan who loves the game will never forget the determined, confident joyful girl who lead him to his destiny.